what's on this page?

Hanukkah (or Chanukah, Chanukkah, Hanuka, all are correct) is on the 25th day of Kislev in the Hebrew Calendar. The Hebrew word Chanukah means “dedication".
Hanukkah is a story about practical politics and a military victory. Antiochus was a Syrian king who ruled over the Jews living in Judea around the time 168 BCE (168 years before the year 0). Antiochus wanted all of the groups in his domain to be Hellenized – to adopt Greek culture. But, the Jews resisted. The Syrian-Greeks (Seleucids) desecrated the Jewish Temple and a war ensued for about 3 years.
The Jews who decided to fight back were called the Maccabees (AKA Hasmoneans) and their leader was Judah Maccabee. Eventually, they emerged victorious and had an 8 day celebration. That’s why Hanukkah is celebrated for 8 days.
A few hundred years later, the rabbis of the Talmud concocted a story about a miracle of oil. They wrote in the Talmud (codified around the year 500 CE) says that when the Greeks entered the Temple, they destroyed all the oil in it. When the Hasmonean/Maccabean dynasty prevailed, they searched and found only one bottle of oil, sealed by the High Priest. It contained only enough for one day, and yet a miracle came about and the oil lasted for eight days.
Of course, that’s the story most of us learn about Hanukkah… but the reality is that it’s just a story – a legend. There’s no historical accuracy to the oil tale.
The written materials from closer to the actual events are not in the Talmud – but the Book of Maccabees I and II. There we learn about a letter sent around the year 125 BCE from the Hasmoneans to the leaders of Egyptian Jewry which refers to the hoilday as “The festival of Sukkot celebrated in the monthof Kislev (December).” So, it turns out Hanukkah was originally celebrated for 8 days because of Sukkot – the Jewish harvest holiday in the fall each year which is an 8 day holiday. Since the Jews hadn’t been able to observe Sukkot while they were at war with the Syrians, they then celebrated the holiday when they finally rededicated the Temple, after the Maccabean revolt. - From Our Jewish Community
​ 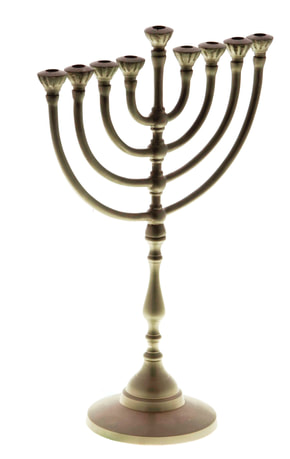 To commemorate Hanukkah, Jews will light a menorah (also known as a chanukiah). The menorah will be placed in a window or doorway. Additionally, since the menorah is a holy item, Jews are encouraged to buy the most beautiful one they can- silver is ideal.

The Shammas
The shamash – the "attendant" candle that is used to kindle the other lights – sits a bit higher or lower than the other candles, on the ninth branch of the menorah. Many Jews have a tradition to use a beeswax candle for the shamash.
Though the shamash's primary function has been served once the candles have been lit, we don't extinguish the shamash. Instead, we set it in its place adjacent to the other lights, ready to "serve" in case a candle blows out. Another reason why we leave the shamash lit is because it is forbidden to use the Chanukah lights for any practical reason. This way, if a candle is needed, the shamash is available for use, preserving the sanctity of the mitzvah lights.

Lighting The Menorah 1. Arrange the lights on the menorah. Ensure that there is enough oil, or that the candles are big enough, for the lights to burn until half an hour after nightfall (or, if lighting after nightfall, for one half hour). On the first night, set one candle to the far right of the menorah. On the following night, add a second light to the left of the first one, and then add one light each night of Chanukah - moving from right to left.
2. Gather everyone in the house around the menorah.
3. Light the shamash candle. Then hold it in your right hand (unless you are left-handed).
4. While standing, recite the appropriate blessings.
5. Light the candles. Each night, light the newest (left-most) candle first and continue lighting from left to right. (We add lights to the menorah from right to left, while we light from left to right.)